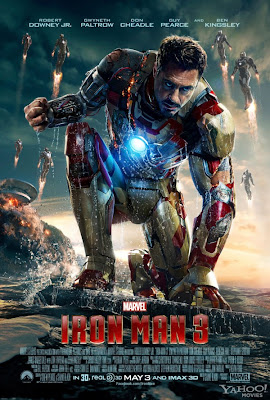 Chances are, if you are in the theater for Iron Man 3, you have seen The Avengers (2012).  If you have not, you will play catch up figuring out why Tony Stark can’t sleep at night, has anxiety attacks, and experiences symptoms of something akin to PTSD.  After The Avengers saved the planet from aliens led by an evil Norse God, Iron Man tries to bring the audience back down to terra firma.

Tony (Robert Downey Jr.) spends less time in his superhero metallic suit in this sequel but he tinkers with them continuously.  They are becoming an unhealthy hobby and interfering with his feisty relationship with Pepper Potts (Gwyneth Paltrow).  There are not so subtle analogies that his suits are metaphorical armor, shields, crutches, etc… between Tony and the outside world.

Tony Stark is the only ‘superhero’ I can think of who would make fun of a little kid.  That’s why Iron Man is usually more interesting than a Superman or Spiderman; he doesn’t take himself too seriously.  Tony’s snappy one-liners are well written and have a bite to them.  The best parts of any of the Iron Man films are Downey Jr.’s quick retorts and insults, not the jet-powered fighting machines duking it out in the sky.

One of the least interesting sidekicks this side of Robin though is Colonel James Rhodes (Don Cheadle).  No longer known as War Machine, he is now a red, white, and blue Iron Man knock-off known as The Iron Patriot.  He is not private sector like Tony Stark but takes his orders from the Pentagon and is put on presidential protection detail.  His presence is a sub-plot throwaway and is only around to furnish an extra metallic suit.

Why all the presidential protection?  A super-villain / multi-national, shrouded terrorist known as The Mandarin (Ben Kingsley) is behind multiple gruesome attacks and is working his way up the chain threatening the leader of the free world himself.  Contrary to his name, The Mandarin is not Chinese; he is not even Asian even though he continuously espouses eastern philosophy in his many diatribes.  The Mandarin’s montage videos paint him as an Osama bin Laden-type figure hiding out in terrorist sanctuaries yet having ready access to aircraft and global logistics.

Another shady figure also hanging around the edges of the story and sniffing around Pepper a bit too close for Happy Hogan’s (Jon Favreau) comfort is Aldrich Killian (Guy Pearce).  This guy transforms from unhygienic nerd to suave businessman and peddles an advanced technology to Stark Industries with grotesque ethical implications.  The technology is never fully explained and has some extremely unpleasant side effects that make the sufferers remind you of something like Red Skull from Captain America.

Until the final scenes, there isn’t much actual Iron Man screen time in the film; it is all Tony Stark the man.  Can Tony still make his way in the world, confront bad guys, and save the girl without the use of his laboratory and fancy machines?  Can a $200 million film franchise withstand the absence of the recognizable armor from a major portion of the movie?  These are softball questions; we all know Iron Man 3 will rake in the dough and it has more than enough ear-splitting explosions to formally kick off the summer blockbuster films.

Writer/director Shane Black wrote a witty screenplay; you will walk away smiling at Tony’s zingers but most likely cringing at the awkward villains and their head-scratching technology.  The first film in the series remains the best one but at least the newest iteration is a step above Iron Man 2 and Mickey Rourke’s lightning whips.