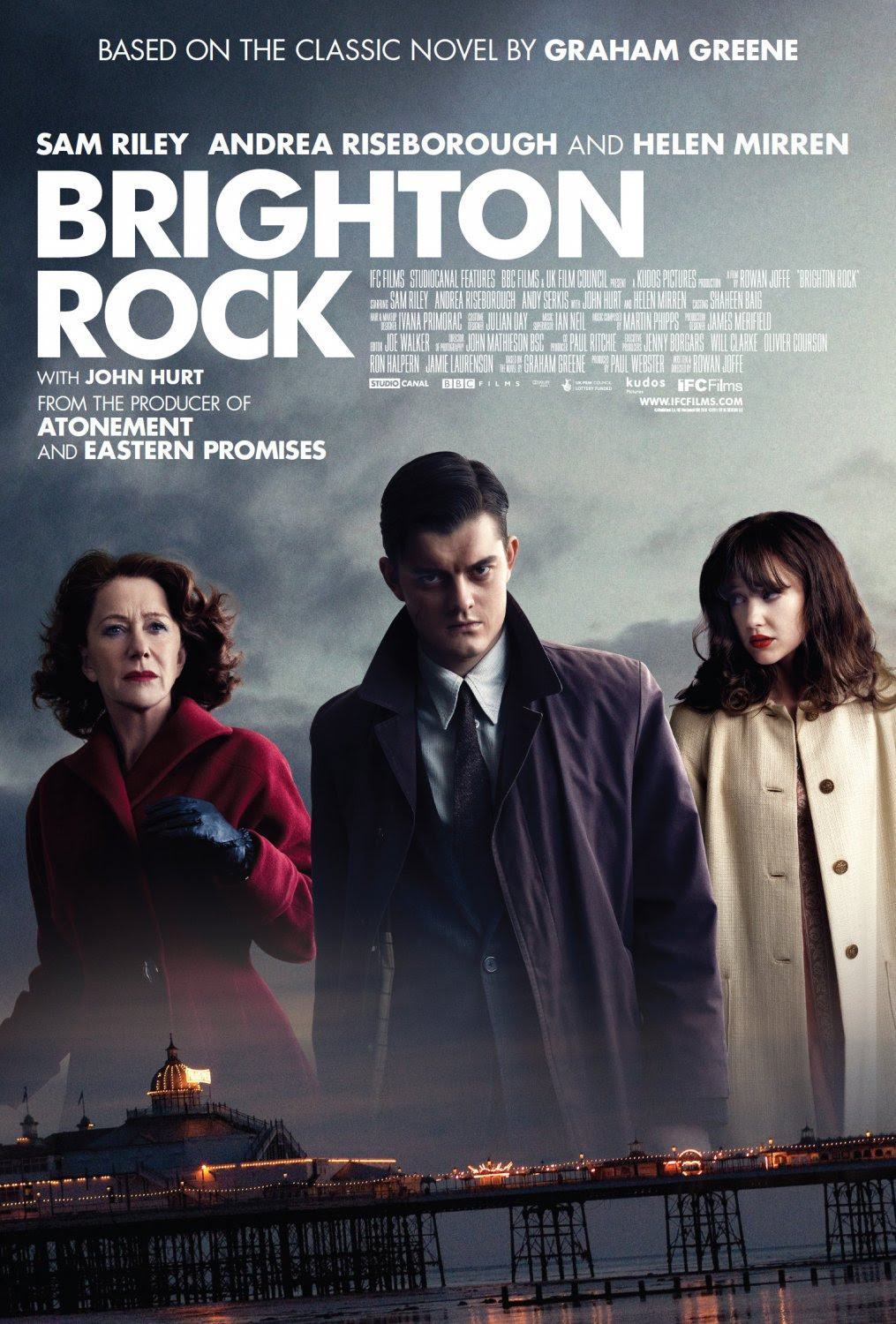 
There is something off about Brighton Rock.  The atmosphere and mood surrounding the action does not match what is going on.  Based on a Graham Greene novel, Brighton Rock follows a low level gangster’s attempt to avenge his father figure, stake a claim to the top spot, and run the mob racket in Brighton, England in 1964.  Encasing this formulaic plot is a soaring orchestral score, shots of the waves crashing on the rocky beach, and dialogue which seems deliberately pieced together from 1930s and 40s gangster pictures.
Pinkie Brown (Sam Riley) witnesses a rival gang member murder his mentor/mob boss in the film’s opening scene.  Pinkie learned everything from this man including intimidation tactics, how to handle a knife, and presumably how to convincingly wear a menacing sneer.  Riley plays Pinkie as a guy you do not want to mess with, let alone have a conversation with.  Unfortunately, poor and innocent Rose (Andrea Riseborough) witnesses a key segment of the revenge attack and becomes connected with Pinkie who needs to keep close tabs on her.  Mistaking his attention as romantic interest, Rose almost becomes comic.  No matter how lonely the girl, I cannot believe any female would be flattered by Pinkie Brown.  He is overtly mean, sarcastic, and threatening to this girl he is trying to convince he has feelings for.  Rounding out the ensemble is a miscast Helen Mirren as a meddling interloper and John Hurt who acts as a sort of Greek Chorus commenting on the plot from aside.
The mise-en-scene; however, is quite convincing.  Brighton is shot as cold, bleak, and gray; adjectives which aptly describe that city in the winter time.  There seems to be nowhere else to go or spend time other than the Brighton Pier, which is true.  Brighton Rock desperately wants to be an epic with its serious moments on the Dover cliffs, brutal knife fights under the pier, and its dangerous love story.  The plot is so thin and trivial though that it cannot match, but only hinder, the help all the other film components are trying to give it such as the score, costumes, and set design.
Do not waste your time with Brighton Rock.  The writer who adapted this novel to the screen is Rowan Joffe who also wrote the screenplay for 2010’s The American.  If you have not had the pleasure of that film yet, see it instead.
Posted by Charlie at 6:46 AM